You're at the right place. Welcome to our new website.

GET TO KNOW BUDAPEST! 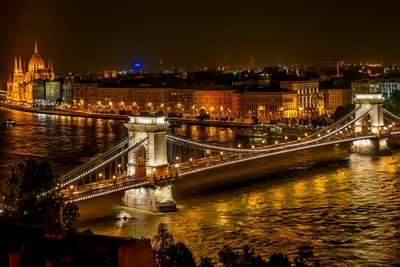 Our hotel, situated on the Buda side,
is a great starting point for exploring the city.
Go and walk through the serpentine streets of the capital,
squares, and exciting locations! Discover the world heritages
and historical sites of Budapest, as well as the wonderful memorials, and buildings!

Distance from the hotel: 1,6 km

Andrássy Avenue (Hungarian: Andrássy út) is a boulevard in Budapest, Hungary, dating back to 1872. It links Erzsébet Square with the Városliget. Lined with spectacular Neo-renaissance mansions and townhouses featuring fine facades and interiors, it was recognised as a World Heritage Site in 2002. It is also one of Budapest's main shopping streets, with fine cafes, restaurants, theatres, Embassies and luxury boutiques. Among the most noticeable buildings are the State Opera House, the former Ballet School, the Zoltán Kodály Memorial Museum and Archives, the Hungarian University of Fine Arts and the Ferenc Hopp Museum of East Asian Arts.

Distance from the hotel: 500 m

Buda Castle is the historical castle and palace complex of the Hungarian kings in Budapest. It was first completed in 1265, but the massive Baroque palace today occupying most of the site was built between 1749 and 1769. The complex in the past was referred to as either the Royal Palace or the Royal Castle. The castle now houses the Hungarian National Gallery and The Budapest History Museum.

Distance from the hotel: 500 m

The Széchenyi Chain Bridge is a chain bridge that spans the River Danube between Buda and Pest, the western and eastern sides of Budapest, the capital of Hungary. The bridge has the name of István Széchenyi, a major supporter of its construction, attached to it, but is most commonly known as the "Chain Bridge". At the time of its construction, it was regarded as one of the modern world's engineering wonders.

Distance from the hotel: 1,5 km

Gellért Hill a 235 m (771 ft) high hill overlooking the Danube in Budapest, Hungary. It is located in the 1st and the 11th districts. The hill was named after Saint Gerard who was thrown to death from the hill. The famous Hotel Gellért and the Gellért Baths can be found in Gellért Square at the foot of the hill, next to Liberty Bridge. The Gellért Hill Cave is also located on the hill, facing the hotel and the Danube.

Distance from the hotel: 3,2 km

Margaret Island is a 2.5 km (1.6 mi) long island, 500 metres (550 yards) wide, (0.965 km2 (238 acres) in area) in the middle of the Danube in central Budapest, Hungary. The island is mostly covered by landscape parks, and is a popular recreational area. Its medieval ruins are reminders of its importance in the Middle Ages as a religious centre. The island spans the area between the Margaret Bridge (south) and the Árpád Bridge (north). Before the 14th century the island was called Insula leporum (Island of Rabbits). Administratively Margaret Island used to belong to the 13th district, but now is directly under the control of the city.

Distance from the hotel: 1,4 km

Váci utca (Váci street) is one of the main pedestrian thoroughfares and perhaps the most famous street of central Budapest, Hungary. It features many restaurants and shops catering primarily to the tourist market.

One of the newest hotels in the capital, Monastery Boutique Hotel Budapest has opened its doors. Our four stared hotel on the Buda side has 47 rooms and situated in a 300 years old abbey which once built by the Capuchin Order. The reminiscent but trendy building is located in the heart of Budapest, in a calm and quiet environment, just a few minutes walk from the Danube, the Buda Castle and many other sights. 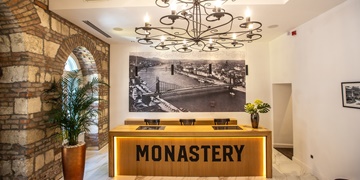 Important Changes
From 1st September 2021 all of our guests (regardless to their age) must present and hand over their ID cards or passports for document scanning at the time of check in to our hotels due to modification of the Act no. CLVI/2016. of Hungary.
More

Did you find a better price in another website?